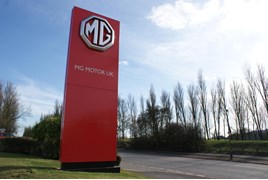 Owner Peter Hinkins said that their city centre site in Canterbury would benefit from being part of the MG franchise and is preparing to officially open its doors to customers next week.

Hinkins said: “We were looking to add another franchise to the dealership and we chose to go with MG for a number of reasons, but mainly because we think that the brand has got a real future to look forward to.

“We are very fortunate to be only one of two garages in the city centre. We see the MG3 as being a perfect car for the demographic and we are sure that it, and the MG6, will sell very well.”

“We can’t wait to add the SUV to the collection next year and, with 80% of our sales being retail, we know our loyal customers will be excited to see our new additions; we also hope they’ll draw in new customers too.”

Matthew Cheyne, MG’s head of sales and marketing, said: “To add another great dealer to our network is fantastic and seeing an open-point being filled is the perfect way to end the year.

“Next year, we’re looking to build upon this by welcoming even more dealers and ensuring we have MG presence in a number of key locations across the UK. We’re always keen to hear from any dealers that are interested in joining the network to work with us in growing MG even more, and with the arrival of the SUV next year it couldn’t be a better time.”

The brand celebrated this year’s results as the figure surpassed 2013 and 2014 registrations combined, but has some way to go to match its 2002 heyday – when it recorded almost 100,000 sales.