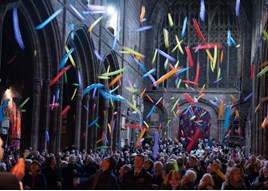 The light-hearted event is a popular one in the dealer group’s calendar, said managing director Mark Mitchell.

He added: “Calls came in from early October with our loyal and regular customers asking for the date to add to their diaries.

“The first seat registrations arrived just 2 minutes and 27 seconds after the invitations were sent out by email.”

With an evening full of Christmas carols, it is a sure-fire way to sprinkle some holiday spirit into the season, he said.

Welcomed by reindeer and donkeys, guests were joined by singer/songwriter Stuart Townend and his band.

As has now become tradition at the event, the event closed with the singing of We Wish You A Merry Christmas, during which more than 1000 rocket balloons were released by guests.

The evening was also a fund-raiser for Mitchell Group’s nominated charity, Home For Good, with its founder Krish Kandiah invited to speak on the work of his organisation and his involvement with the adoption and fostering of children and also on the current refugee crises.

Mitchell said the event has become synonymous with Mitchell Group customers as the beginning of their Christmas celebrations. Mulled wine and mince pies are served afterwards within The Cloisters of the Cathedral in the midst of their Christmas Tree Festival which proves to be a very atmospheric end to the evening.

Mitchell Group, with a 25 year history, represents the Lexus, Mazda and Skoda brands at its Cheshire Oaks location.