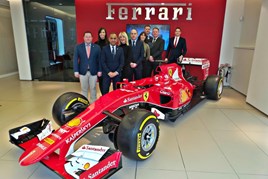 HR Owen Ferrari has been named as the best Ferrari dealership in the world after scoring the maximum in all areas of a strict judging process.

The South Kensington-based dealer was named Ferrari Dealer of the Year above more than 200 other worldwide Ferrari dealers following an assessment which included scoring for customer satisfaction and servicing.

As well as the honour and recognition of being named the very best dealer of one of the world’s most famous brands at a dealer conference in Italy, the dealership was also awarded a 2015 Ferrari F1 car as part of the prize.

James Champion, HR Owen’s Ferrari brand director, said: “To become a Ferrari dealership in the first place requires exemplary service in all areas, so to be named the best of an already impeccable set of dealers is one of our proudest achievements to date.

“Because of the complex nature of the assessment process it really is a combined effort from all of our team. Everyone from the staff in the workshops, the technicians and sales staff to the management team contributed. Many of the things we were judged on take a huge amount of effort.”

Ferrari assesses each dealer on how well trained their staff are, the availability of a demonstrator of every model of Ferrari, how long servicing takes and on customer satisfaction.

HR Owen Ferrari scored the maximum across each category, securing it the title above dealers from locations as far-flung as Argentina, South Africa and New Zealand.