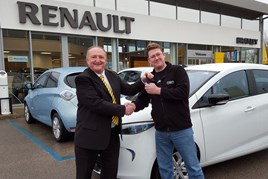 Government grants and a surge in the number of public charge points have been credited for a surge in electric car sales which sparked a dealership record at Brayley Renault.

The Milton Keynes operation sold 30 electric all-electric Renault Zoe cars in December alone – a record for a single month at the dealership – and Paul Brayley, managing director of Brayleys Cars, said he expected the trend to continue in the first quarter of 2016.

He said: “Our Renault dealership has seen significant growth in enquiries and sales of all-electric vehicles as people become more aware of their environmental credentials, low running costs and excellent driving characteristics. We would expect to see a further spike in sales over the next couple of months before the reduction in the Government grant.”

Motorists purchasing ultra low emission vehicles currently receive a Government grant of 25% towards the cost of the vehicle, up to a maximum of £5,000. This will be reduced by £500 from 1 March 2016, however.

A Brayleys spokesman said that electric car buyers in the Milton Keynes area had been further encouraged to make the switch to zero emissions vehicles by Plugged-In Places.

One of eight national pilot projects set up by the Government to explore and encourage the take-up of electric vehicles, the scheme now consists of more than 200 charging points in Milton Keynes and across the county.