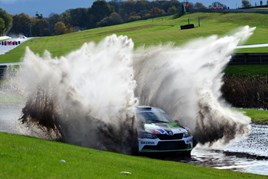 Skoda dealer Neil Simpson is set to return to the MSA British Rally Championship for the first time in 16 years – driving a Skoda UK-supported Fabia R5.

Simpson, from Clitheroe, Lancashire, last contested the BRC in 2000 and is best known for driving a works Volkswagen Golf TDI to a career-high second place finish in the BRC category on the 1999 Manx International Rally.

Simpson said: “It’s been sixteen years since I last contested the British Rally Championship, so I can’t wait to get going again. It will be in at the deep end on the opening round, as the Mid Wales Stages will be my first competitive outing on gravel since 2001, but I’m looking forward to it.”

The Simpson Group CEO had stopped rallying completely in 2001 to concentrate on building the family business, which has dealerships in Colne and Preston, but returned to rallying in 2014, driving an ex-Esapekka Lappi Fabia S2000 on selected British and European events.

After making a successful return in local rally stages, Simpson acquired a brand new Fabia R5 from Skoda Motorsport at the end of 2015.

Now he plans to contest all seven rounds of this year’s BRC in a car co-driven by Elliott Edmondson.