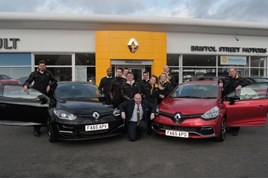 The Haydn Road dealership is the first Bristol Street Motors outlet to receive the accreditation which was first issued when Renault launched its Renaultsport-specific dealership concept in 2015.

Members of the team at Bristol Street Motors, a division of Vertu Motors plc, received dedicated advanced technological training to sell models, such as the Clio Renaultsport Trophy and Mégane Renaultsport Cup-S, before the dealership was able to assume its new status.

“Everyone at Bristol Street Motors Renault Nottingham works hard to ensure customer satisfaction and we always ensure that our salespeople are up to date with the latest technological advances from Renault, but this new status cements our reputation as one of the premier Renault dealerships in the Country.”