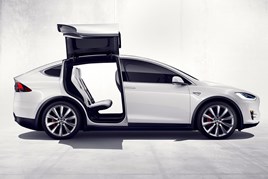 Electric car specialist Tesla is opening a new store in Leeds as it continues to broaden its retail network into the UK’s key shopping destinations.

The opening of the new facility, in the Yorkshire city’s Victoria Quarter, will add to a network that sees the California-based brand selling cars in Westfield London, Oxford Street, the Bluewater shopping centre in Kent, Touchwood Court centre, Solihull and Multrees Walk in Edinburgh.

Including the proposed Leeds showroom, which will open to the public next week, the electric car manufacturer will have a presence across 14 UK locations, reported International Business News.

Kevin Farrow of CBRE, a commercial property and real estate services adviser known to be advising Tesla on some store deals, told the web-site: "Tesla wants to develop their store portfolio in a retail environment where there is a clear link with other premium brands and where they can create a welcoming environment for all shoppers.

“The response has been quite extraordinary as you have had people coming in their lunch breaks and placing orders for cars that can cost more than £50,000."

Tesla is understood to be building the new showroom with a minimalist and inviting atmosphere. It will be aimed at creating a non-pressurised sales environment, where shoppers can step in to collect more information about its electric vehicles.

The opening of Tesla’s Leeds showroom is timed to coincide with the UK launch of the Model X vehicle, a gull-wing doored SUV that can accelerate to 60mph in 3.8 seconds.