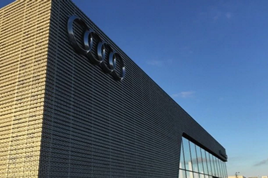 John Clark Motor Group is preparing to make full use of its expanded Dundee Audi showroom following the completion of a £700,000 redevelopment programme.

A dramatic curved feature wall, unique mesh effect over-cladding and curved ceilings are central design features of the upgraded, 10,000sq-ft showroom which now delivers space for up to 20 new vehicles following the addition of 2,200sq-ft.

A separate building on-site can house 12 used cars, meanwhile, and an 18,000sq-ft on-site workshop offers space for servicing in excess of 30 cars.

Each bay includes a hydraulic vehicle lift which is cast into the concrete floor allowing them to be fully recessed.

Customers can also make use of a three-lane automated drive-in service located adjacent to the site’s service reception, ensuring a seamless and efficient aftersales process.

Work on John Clark’s upgraded Dundee Audi facility was expected to be completed this week by Robertson, the development company which also built the AM100 group’s £9 million flagship Audi Terminal in Aberdeen.

That development was opened in October last year and followed Robertson’s development of £5m Nissan and MINI dealerships within the same Balmoral Business Park in Altens, Aberdeen, in 2014.

Keith Taylor, regional managing director of Robertson Eastern, said: “Being appointed to deliver a third facility for JCMG demonstrates that we have become a trusted supplier to the Group and we’re very pleased to be delivering their Audi showroom in Dundee.”