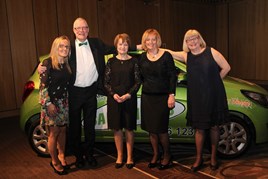 Bristol Street Motors have overseen the hand-over of a Vauxhall Viva as part of a charity auction which helped to raise over £16,500 for the Samaritans.

The team at the Scotswood Road dealership donated the vehicle to show their support for the charity, which has had a presence in the region for half a century and is part of a national network of 201 branches.

“Volunteers like John work tirelessly to ensure the people of the North East have someone to talk to when they’re in need.

“The team at Bristol Street Motors are very pleased to hear that the auction, raffle and other fund-raising activities successfully raised more than £16,500 for Samaritans of Tyneside.”

The Samaritans is run by a team of highly-trained volunteers who give of their time to help others in need of a listening ear.

John, who is retired and lives with his wife Lynn in High Heaton, has volunteered for Samaritans of Tyneside for over five years.

As well as being a listening volunteer, John is part of the training team at the Tyneside branch.

Samaritans of Tyneside offers support to anyone in distress and needing someone to talk to and has volunteers available 24 hours a day, 365 days of the year.

John Joyce said: “I am delighted to have won the auction. I have witnessed first-hand the great work done by the volunteers at Samaritans of Tyneside and the money raised from this event will allow us to continue delivering the level of care and attention we are known for.

“Winning the brand new Vauxhall Viva, kindly donated by the local dealership, is the icing on the cake for me.”