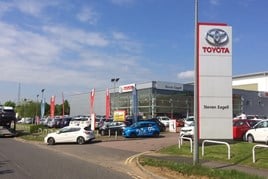 Steven Eagell group is aiming to increase its annual turnover by 28% in two years after kicking off 2016 with a hat-trick of acquisitions.

The burgeoning Toyota franchisee now boasts eleven sites across six counties following the completion of the acquisition of Marshalls Peterborough and Kings Lynn Toyota sites and that of Hills Toyota in Bishop’s Stortford earlier this month.

And while managing director, Steven Eagell, describes the rise of the group’s status since it was founded in 2002 as “evolutionary”, he has not discounted further acquisitions in the near future.

Speaking to AM, Eagell said: "We're not out to make acquisitions that won't add to our profitability, but there are businesses I would like to add.

“I’d never say never to adding another manufacturer partner, although our relationship with Toyota is very good and I wouldn’t want to jeapordise that.

“I’d like to add Lexus, though. I think that would be a good addition.”

Steven Eagell was founded in Bletchley in 2002, before moving to its current Milton Keynes site and beginning a series of acquisitions in Luton.

Eagell said that he expected all the group’s new acquisitions to be profit earning from day one.

He added: “Ultimately the business has grown in quite a steady fashion because I’m very hands on and I like to visit all the sites and hear what difficulties the staff might be having so we can act on them. I don’t want that to change, regardless of any further acquisitions the future might hold.”