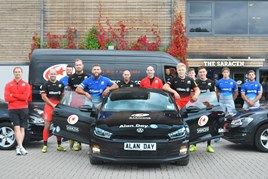 Alan Day Volkswagen was at the heart of the scrum to support Saracens as they completed a domestic and European double at Twickenham on Saturday.

The dealership provides Volkswagen models to the players and coaching team and was at the heart of the celebration when Saracens succeeded in retaining their Premiership title by beating Exeter 28-20 at Twickenham.

The title was the latest accolade for the team which won the European Champions Cup earlier this month.

Recently Alan Day Volkswagen, which is based just five miles from Saracens’ Hendon home in North West London, supported Sarrie’s RFC as it undertook its first ever disability rugby tour.

It saw a group of 14 boys aged between 12 and 19 play against a team of fellow players with a disability from Worcester ahead of a visit to see Saracens play Worcester.

Tanner was amongst those who took part in the event.

He said: “We’ve been involved with the Saracens Sports Foundation for 18 months.

“I go along with some of my team every Monday at 4pm, and we help to coach the Sarrie’s RFC players.  It is rewarding and it’s fun, too. It’s an important part of my week.

“Several of my team do it and more want to be involved.

“It means a lot to people in our business.  Occasionally I’m asked how we can give up so much of our time but the answer is simple, it’s just that we love seeing the kids grow from week to week.

“It’s priceless, and the team at Alan Day are so grateful to be involved in what is a brilliant programme.”