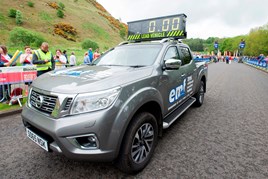 Alex F Noble & Son has celebrated its most successful year to date by supporting runners in the Edinburgh Marathon as official transport partners to the 14th annual event.

The dealership provided eleven vehicles for this year’s event, which attracted over 30,000 entries from across the globe, making it Scotland’s biggest running festival and the second largest marathon event in the UK.

A Nissan NP300 Navara took centre stage as the lead clock car, with the other two acting as general ‘work horses’.

A pair of branded Nissan X-Trails transported race crews around the city, meanwhile, as three Nissan NV200 and three NV400 LCVs were used to transport various items of equipment over the race weekend.

“This year saw us provide the largest number of vehicles to the EMF to date.

“All our eleven vehicles had to work harder than ever in fulfilling their various rolls, but I’m pleased to hear from the organisers, that all eleven have again acquitted themselves extremely well.”

“With these consistently large numbers, we were asking a lot from our transport fleet, but yet again, the Nissan vehicle range supplied by Alex F Noble & Son covered all the bases and all vehicles were absolutely ideal for our purposes.”