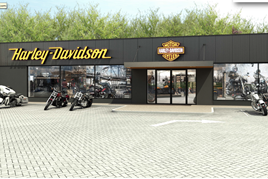 Jennings Motor Group has announced the creation of 12 new jobs with the expansion of its Harley Davidson franchise business into the North East.

As reported by AM magazine, in its April insight into the group, Jennings will add to its Harley Davidson operation in Leeds with the development of an all-new site in Gateshead.

Spearheaded by company director, Sohail Khan, son of managing director, Nas Khan, the project is part of an on-going investment and expansion plan following the establishment of the Leeds operation as an independent and privately-owned company in December last year.

Nas Khan said; “The recently implemented and ongoing expansion and investment plan is seeing the company diversify to offer customers the two-wheel mode of transport, which is how the Jennings business began more than a century ago.

“We are extremely excited about the launch of an additional Gateshead Harley-Davidson dealership, which will complement the group’s existing showroom in West Yorkshire.”

Scheduled to open at the beginning of July, the new dealership, based on Eslington Road in Gateshead, is expected to create 12 jobs.

Responsible for overseeing the construction project with local firm, Focus Architecture + Surveying, in addition to steering a new recruitment drive, Sohail Khan, said; “We are embarking on a new and exciting business venture in the North East and we are looking forward to developing the highly prestigious and globally recognised brand on both a local and national level, in addition to increasing business across new and used sales, service, parts, accessories and merchandise.

“It’s been a very busy but exciting few months and we are looking forward to meeting and greeting customers when the official opening takes place next month.”

In 2012, Sohail, played a pivotal role in the launch and day-to-day management of the prestigious Leeds-based Harley-Davidson dealership, located on Wellington Road Industrial Estate.

His current role, as director at Jennings Motor Group, sees him assume responsibility for marketing and digital management throughout the group.