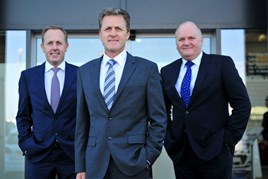 The Motorline Group’s expansion has continued with the acquisition of the Westlands Motor Group – taking its projected annual turnover to £600 million.

Motorline’s latest deal sees its reach expand from its heartland in the South East into the South West Midlands and increase its number of dealerships to from 36 to 43.

Established by Nick Wilczynski, Westlands Motor Group employs 200 staff and has a turnover of £65 million.

The acquisition makes Motorline one of the UK’s largest Toyota brand partners with 13 dealerships in the UK as well as increase the number of Hyundai dealerships from two to five.

Motorline Group chairman, Glen Obee, said: “The Westlands acquisition is an excellent opportunity for us to continue to build on our highly successful relationships with Toyota and Hyundai and to strengthen our Group’s investment and strategy from Bristol and South Wales up the M5 corridor.”

Motorline has acquired a mix of freehold and leasehold properties as part of the acquisition, with each set to adopt its group branding in the latter half of 2016.

Mike Jones, chairman of ASE, said: “This represents a further significant expansion for Motorline moving them into the UK’s 25 largest dealer groups and it has been a pleasure to work with them on this transaction.

“I am also pleased to see a successful exit for Nick Wilczynski who we have worked with for many years and was advised by Ian McMahon and Adam Cottam of ASE.”

Founded in 1972, Motorline represents 11 leading car manufacturers with dealerships across the South of England, South West Midlands and South Wales.

So far this year the group has moved to new head offices in Broad Oak Road, Canterbury, opened its first Infiniti showroom in Bristol and acquired the former Aprite Nissan showroom in Oxford.

Refurbished Lexus showroom at Tunbridge Wells and Maserati facility in Cardiff have also been unveiled by the group.

AM Poll
Which aspect of your business will require most focus in 2021?
Vote
View all
1138