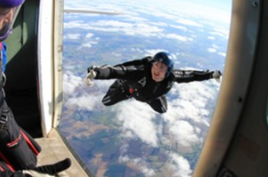 A doctor’s orders following a diagnosis of high blood pressure would probably not be a skydive, but despite the medical condition (and a fear of heights), Marshall boss Daksh Gupta continues with his plans to jump out of a plane at 10,000 feet soon in aid of BEN.

Chief executive Daksh Gupta’s leap of faith - strapped to a professional skydiver in the sky above Northamptonshire - launches the Industry Leader Challenge on behalf of BEN.

As he prepares mentally for the challenge, Gupta acknowledged the support he has so far received towards helping him achieve his fundraising target of £100,000 for the sector charity, before passing on the challenge to another dealer boss, who, feeding on the highly competitive nature of the sector, should aim to raise even more money for BEN.

They will undertake a similar challenge in 2017. A second executive has volunteered to do their part in the Industry Leader Challenge, in 2017. Their name will be made public at the BEN Ball in December.

Gupta said: “I’m not mentally preparing for it, because I don’t want to think about it, let alone talk about it.

"Alongside the fear of heights, I have found out I have very high blood pressure. I’m on medication, but a parachute jump is far from being a sensible treatment.

"But while someone might have to push me from the plane there is no way I’m going to back out. I set myself the challenge and the cause is too important.”

He was inspired to help by former Marshall director Sarah Sillars who climbed Mount Kilimanjaro for BEN in 2010, raising £38,000.

He expressed his thanks to the organisations that have donated to his cause so far (listed below).

Gupta is a longstanding supporter of BEN.

He is its vice-president and was instrumental in the founding of Dealers Backing BEN in 2010. This allows dealers to give £1 to BEN from the sale proceeds of each car sold through auction. It has so far raised £1 million.

The support comes as BEN reveals demand for its services is increasing.

The companies that have sponsored Gupta so far:

> To donate to Gupta's 'industry leader's challenge' for BEN go to www.justgiving.com/Daksh-Gupta/

AM Poll
Has the UK motor retail industry handled the coronavirus lockdown well? Please leave a comment.
Vote
View all
100