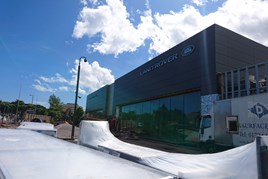 Peter Vardy Group will be ready open the latest addition to Jaguar Land Rover’s revamped dealership network when it accepts the keys to the £8 million Aberdeen facility this week.

The group will move into the new dealership on Wellington Road and begin preparations ahead of its official opening to customers on August 8th.

Peter Vardy, chief executive of the fast-growing Scotland-wide automotive retailing group, said: “We are very excited by getting the keys to what promises to be a stunning new JLR facility. We simply cannot wait for opening day.”

Peter Vardy’s new facility has been developed as part of Jaguar Land Rover’s drive to see the majority of its dealerships under joint ownership and housed under the same roof in each market area.

Created as part of the brands’ Arch CI concept, the re-imagined network will comprise of 138 sites, made up of 84 Land Rover and 117 Land Rover locations, by its planned completion date at the end of 2018.

Peter Vardy’s new, two-floor facility features a ground and mezzanine, linked by escalators, and lies at the heart of a site which will contain over 100 new and approved used vehicles.

Three customer handover bays are designed to make the experience of buying a Jaguar Land Rover product almost as exciting as owning one, while 26 ramps deliver additional servicing facilities.

Customers will be able to enjoy two business lounges with in-house barista and chef, creating a relaxing and welcoming environment for all visitors. There is also a children’s play area.

The new facility has been built by Ogilvie Construction, which last year completed the nearby Porsche Centre Aberdeen.

Duncan Ogilvie, chief executive, Ogilvie Group, said: “We are putting the final touches on this state-of-the-art facility for Peter Vardy, which has been built to a high quality specification and creates a premium experience that customers expect from a brand as prestigious as Jaguar Land Rover.”