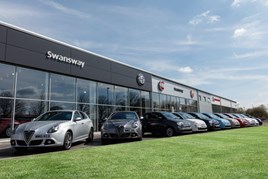 Average return on sales reduced slightly from 1.36% to 1.32% and the business said its margins were under pressure as the company "chases increased manufacturer targets".

Gross profit on sales at £13m was 5% ahead of the previous year, driven by the group’s finance income boosted by attractive manufacturer offers. Aftersales gross profit increased by 5% to £7m.

Swansway has invested over £1m in a new stand-alone fleet operation facility, extended its Retailer Support Unit and re-developed its accident repair centre. The company is also investing in headcount to support future growth. The Retailer Support Unit is Swansway's version of a customer contact centre.

The group acquired its fourth Honda franchise in the Manchester area with the purchase of Gordon’s Bolton operation. The group’s Honda division returned to profitability in 2015 and its Land Rover business produced a “very satisfactory return” in its third year of trading.

Profits at Swansway’s Audi and Volkswagen dealerships were down overall on the previous year despite increased volumes and the business put this down to reduced margins on fleet deals.

The group saw traffic to its websites increase by 29% in 2015, generating 100,353 enquiries, up 37% year-on-year. Its SmartMail system generated 7,816 service bookings during the year.

The director’s statement from Swansway’s annual results said: “The company has made a promising start to 2016 with new car volumes ahead of 2015 although margins are down as the company chases increased manufacturer targets.”

Swansway has five group directors made up of the three Smyth brothers, David, John and Peter, joined by Rachel Monfredi and Sarah Eccles.