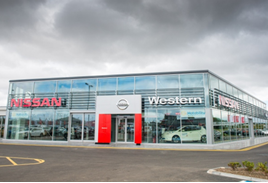 A new flagship Nissan dealership for Scotland has been officially opened in Edinburgh by Eastern Western Motor Group.

Western Nissan is at Edinburgh’s Luxury Car Village, in Newbridge.

Purpose-built at a cost of £6.5 million, Scotland’s biggest Nissan outlet was developed after the former site at Corstorphine Road proved too small.

Western Nissan also has Nissan centres in Stirling and Dunfermline.

Employing 100 people – and having created 20 new jobs – the new development centres around a 15-car showroom.

The showroom features an angular roof designed to both maximize the impact of Nissan’s 21st century retail concept and to meet strict flight path planning regulations because of its proximity to Edinburgh airport.

The site also has a 14-bay workshop.

Peter Collin, Eastern Western Motor Group managing director, said: “The opening of this new site completes the development of Edinburgh Luxury Car Village and puts Nissan at the heart of what is now the number one destination for car buyers in this part of Scotland.”

Dealer principal John Latrobe said: “It’s particularly pleasing that this new dealership has a prime spot at Edinburgh luxury car village surrounded by premium brands. As a group our whole ethos is to apply a premium brand mentality to everything we do.”