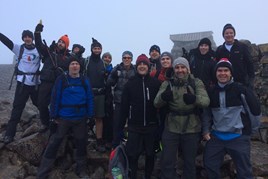 A trio of Honda dealers completed a hat-trick of climbs up Britain’s loftiest peaks as they hit new heights in a bid to raise £15,000 for charity.

A team of 20, made up of want-to-be explorers from Swansway Honda Bolton, Cardiff Honda and Vertu Honda, along with 17 volunteers from Honda UK, bagged the biggest mountains in England, Scotland and Wales to raise almost £15,000 for Parkinson’s disease UK and rugby children’s charity, Wooden Spoon.

Scafell Pike, Ben Nevis and Snowdon were scaled in under 24 hours in the gruelling challenge which saw team members start up Ben Nevis at 8.30am and reach their finish line at the foot of Snowdon at 7.05am on October 13 – finishing the challenge in just 22 hours 35 minutes.

“It was so much harder than I’d thought it would be, with 11 hours spent in a minibus getting between the three peaks. Believe me, a six-hour stint in a small minibus with 12 sweaty blokes is very definitely not a pleasant experience.”

Philip Crossman, managing director of Honda UK, said: “The Three Peaks Challenge is an incredible feat for the team at Honda and our dealerships to undertake supporting both Wooden Spoon and Parkinson’s. The two charities were chosen to raise awareness of children and adults facing difficult life changes.

“I have no doubt that the team will succeed in their climb and donation goal which has been rising rapidly over the past few weeks.

"With all the training that has taken place the team and charities deserve as much support and as many donations as possible.

“If you are interested in donating to Wooden Spoon and Parkinson’s, then head to our Just Giving pages where there is more information on the charities and the climb.”