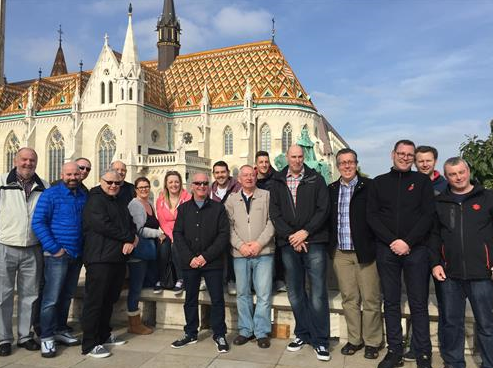 Suzuki GB has crowned the winners of this year’s Skills Awards for the best performing aftersales staff in its dealer network.

The annual event is the culmination of the six-month contest which is part of the vehicle manufacturer’s distance learning programme.

It is designed to honour the best performing aftersales managers, advisors and technicians within its automobile dealer network.

More than 470 people participated in the contest, and throughout the early elimination rounds, which spanned four months, the number was whittled down through their responses to a series of questions.

The scores then revealed the finalists in the three main categories which were made up of the top performers from each of the dealer network’s six zones in the UK and Ireland.

All were rewarded with a trip to Hungary, where they took in the sights of Budapest and visited Suzuki’s production facility in Esztergom.

To win the coveted top prize, the remaining contestants completed another round of tasks in-line with their specialist area.

Technician of the Year

Aftersales Advisor of the Year

Aftersales Manager of the Year

The winners received their awards plus a £300 Love to Shop voucher from Denis Houston, Suzuki GB’s aftersales director and Dale Wyatt, director of the automobile division at Suzuki GB.

The ceremony also included the presentation of certificates for Apprentice of the Year.

This is the result of a final year competition and the nomination by trainers of automobile service technician and parts / customer service advisor apprentices in their first and second years.

The Tim Crewdson Award, which recognises the apprentice that demonstrated an outstanding improvement during the last 12 months, was given to Matthew Osbourne, of Monty’s of Sheffield.

Houston said: “Everyone who took part in the competition, from beginning to end, did remarkably well, and we would like to congratulate them for their incredible support in always making this such a fantastic contest.

“The yearly initiative not only recognises achievements, but more importantly, it’s a valuable learning tool where aftersales staff and technicians can hone their skills and network with their peers from across the country to exchange best practice.”