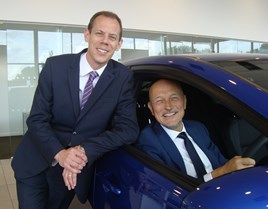 Brayleys Cars has taken on its third Kia dealership, following the acquisition of the former Humphris Oxford Ltd operation, for an undisclosed sum.

A number of alterations are underway at the former Humphris site in Rose Hill, Oxford, including the creation of a used car display area for up to 65 vehicles on the first floor, above the new car showroom.

Brayleys expects to sell more than 1,000 units from the refreshed dealership this year.

Paul Brayley, owner and managing director, Brayleys Cars, said: “It’s been 13 years since Brayleys was established but despite something of a roller-coaster year for the UK both politically and economically in 2016, we exceeded our forecasts in both volume and profitability.

“Our team has delivered beyond budget in all areas of the business, resulting in a record performance, which positions us well for this year.

Brayleys’ achieved a record trading performance in 2016, boosted by the success of its second Kia site, which opened a year ago in Enfield.

The group also experienced a significant uplift in trading at its adjacent Honda operation, it said in a statement.

Lipscombe joined following a 15-year tenure at Johnsons Cars, where he was most recently financial controller, dealerships.

Brayley said: “I’m also delighted to welcome Richard Lipscombe, as his experience will help us secure sustained, profitable growth in the years ahead.”

Mark Corr, operations director and Alice Edwards, human resources manager, are the other members of the Brayleys’ board.