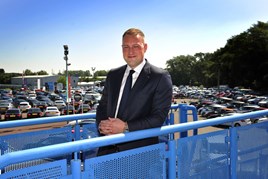 Sytner Group has signed an agreement to acquire the CarShop car supermarket business.

Northampton-based CarShop has been in operation since 1999 and has five large-scale retail locations operating in Cardiff, Swindon, Northampton, Norwich and Doncaster plus a 15 acre preparation centre in Leighton Buzzard, selling used cars and new MG Motors models.

Sytner said in a statement that its addition to the group is expected to generate estimated annual revenue of approximately £275 million in 2017.

The acquisition is subject to certain conditions and is expected to close by the end of the first quarter 2017.

Sytner Group managing director, Darren Edwards said: "The acquisition of CarShop enables Sytner to expand and diversify our business into an exciting, growing sector of the market with a proven, highly successful operator.

CarShop chief executive Jonathan Dunkley said: “We are thrilled with the opportunity to join forces with Sytner to further develop and grow the CarShop brand. With our combined resources, we can leverage digital technology, further develop our people and deliver a world-class customer experience.

“We believe the CarShop model is scalable to other markets across the UK and with the significant resources that Sytner has at its disposal we believe we have the opportunity to become the largest and most admired Car Supermarket brand in the UK”.

CarShop is a multi-award winning business which claimed the Best Website award at the 2015 AM awards.

He told AM of his intentions to double profits over the next three years, adding: “To do that, we need to open three new stores, one at the end of this year and one at the end of 2017, with another following nine months to a year later.”

CarShop’s leadership team, including Dunkley, will stay on as part of the Sytner acquisition.

Also among the business’ staff are marketing director Leo Nelson, the former head of digital for Arcadia Group, operations director Kirk O’Callaghan, a former head of operations for Halfords, and Dunkley’s younger brother, James, who is commercial director.

How CarShop doubled its profits in 12 months

How CarShop doubled its profits in 12 months