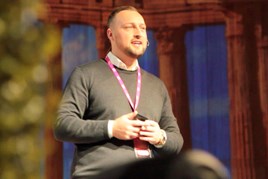 CarShop has set its sights on a record 2017 at its first ever CarShop Management Conference.

The launch of the independent used car retailer’s “Mission World Class” – the business’ strategy to lead the evolution of the automotive marketplace – the event aimed to immerse its employees and select partners in a virtual global tour.

By recognising the highlights of 2016, key contributors to CarShop’s success and using interactive workshops facilitated by Auto Trader, Cox Automotive and Lloyds, MC16 laid the foundations on which to further build on the success of 2016 and futureproof CarShop.

“2016 really has been a phenomenal year, but with so much socio-economic and technological change on the horizon, simply celebrating the success is not enough.

“By heavily investing in our people, and encouraging innovation from within, we believe we’ll be able to continually build on our success challenging the perceptions of used car retailing by providing a world-class solution and totally disrupting the marketplace.

“Feedback from the event has been extremely encouraging and we’re delighted all the hard work has paid off.”

They also travelled to ancient Greece, the Brazilian rainforest and Austria before enjoying Las Vegas-themed celebrations as part of its ‘global tour’.