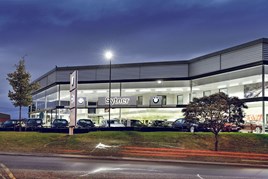 Sytner Group has become the UK’s biggest dealer group following its acquisition of CarShop, knocking Pendragon off the top spot for the first time in 19 years.

Barring a major acquisition by Pendragon, even the lowest of those figures would push Sytner into first place in the AM100 table once the deal is completed, as expected, in Q1.

Trevor Finn, Pendragon’s chief executive, said: “I have a huge amount of respect for Roger Penske and his team for the work they’ve done to develop their market share and performance in the premium car franchises.”

Using 2015 figures, the added turnover from CarShop would represent a rise of 4.9% for Sytner, an echo of the “five or six per cent” fall in new car registrations predicted by the SMMT this year.

Darren Edwards, Sytner Group managing director, said that slowdown was part of the reason for the investment in used car sales: “The strong new car market of the past three to four years is likely to slow down, whereas over the next three years the used car market will continue to grow, particularly in segment two – the three- to five-year parc – at something in the region of 6% per year, so the timing feels right to move into this sector in a meaningful way, with an operator who has already shown significant success.”

Edwards said: “Penske and Sytner are dynamic and entrepreneurial organisations, so we are always looking at opportunities to expand.

“This move is part of a wider, long-held Penske global strategy to diversify the business.”

While the SMMT’s worst-case scenario would see new car registrations fall from 2.69m in 2016 to 2.53m in 2017, Cap HPI reported that 2016’s used car market topped the 7.7m sales mark – beating last year’s figure of 7.2m – and continued momentum is expected this year.

Nor is Sytner the only member of the AM100 top 10 to recognise the benefits that the car supermarket approach can bring.

Over the next three years, the used car market will continue to grow, so the timing feels right Darren Edwards, Sytner Group

Pendragon, with its Evans Halshaw Motorhouse car supermarkets and Car Store click and collect sites, reported in October that year-on-year used vehicle revenue in Q3 2016 had grown by 8.3% and used gross profit rose by 0.5%.

Arnold Clark Automobiles has 18,000 cars across 21 UK Motorstore sites, following the opening of a Nottingham site in June 2016.

Lookers’ used car sales increased 15.7%, to 70,492, during 2015. While it sold its Bristol Trade Centre to independent retailer, Carbase, and its Burton Trade Centre to Arnold Clark, Lookers’ Charles Hurst operation does have 10 UsedDirect sites in Northern Ireland.

Edwards said: “In terms of the potential to grow, CarShop’s successful business model is eminently scalable and we will be working with Jonathan (Dunkley, CarShop’s chief executive) and his team to roll out their model across a number of new locations in the relative near term, with the ultimate aim of creating a nationally recognised and admired retail brand.”

Edwards said CarShop would maintain its MG Motor UK franchise and would not be realigning its stocking policies to avoid competing with Sytner sites where they occupied a similar market area, such as Cardiff.

Edwards said: “We really liked the geographical spread of CarShop’s retail locations and actually weren’t concerned whether they were in towns where we had existing franchised dealerships. We were more interested in the scale and quality of their premises and the standard of the retail environment, which, in all cases, were excellent.

“The prep centre in Leighton Buzzard is also very impressive. In particular, we loved the photo studio.”

Edwards said many of CarShop’s principles aligned with Sytner’s, including its priority on gathering and using customer data.

Dunkley, who traded a place studying English at Oxford Brookes University for life on the forecourt in 2004, is not only building a Sell Us Your Car online offering to rival the likes of WeBuyAnyCar, but also added 12 data analysts to his team after he took over the business to ensure it was identifying the right stock.

Edwards said he was impressed with the hi-tech approach that earned CarShop an AM Award for  Best Dealer Website in 2015 (it is also shortlisted for this year’s awards –see page 18 for the full list).

“When you look at the amount of awards CarShop has won, you can see that there is a great deal of substance in the business, particularly in stock/sale data analytics and their progressive approach to the digital retail environment, where I believe they are class-leading and in many ways doing a better job than a lot of franchised dealers,” he said.

“It’s a key reason why we decided to invest.”

What Sytner has bought 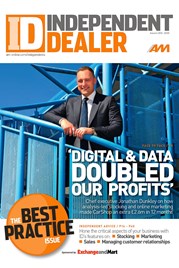 CarShop has been in operation since 1999 and has five large retail locations – Cardiff, Swindon, Northampton, Norwich and Doncaster – stocking about 2,900 cars, plus a 15-acre preparation centre in Leighton Buzzard and an in-store MG Motors franchise that  retails about 400 new cars each year.

Dunkley will stay in post alongside his existing team – marketing director Leo Nelson, the former head of digital for Arcadia Group, operations director Kirk O’Callaghan, a former head of operations for Halfords, and Dunkley’s younger brother, James, who is commercial director – following the completion of the Sytner acquisition, as the business continues to be run as a subsidiary.

Last summer, Dunkley shared his plans to double profits again within three years and to open three new sites by 2018.

“We have a very clear idea of where our next three stores will be, we just need to get the deals done on those sites and find the land,” he said.

“We are thrilled with the opportunity to join forces with Sytner to further develop and grow the CarShop brand. With our combined resources, we can leverage digital technology, further develop our people and deliver a world-class customer experience.

“We believe the CarShop model is scalable to other markets across the UK and with the significant resources that Sytner has at its disposal we believe we have the opportunity to become the largest and most admired car supermarket brand in the UK.”