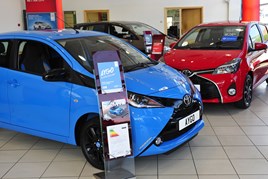 The UK new car market achieved a 12-year high in January, with a 2.9% uplift in registrations. Private registrations were up 5%.

According to figures published today by the Society of Motor Manufacturers and Traders (SMMT). 174,564 vehicles were registered last month.

The alternatively fuelled vehicle segment grew 19.9% to take a record 4.2% market share2 –  the first time 4% has been surpassed.

Across other fuel types there was a mixed picture with diesel registrations down -4.3% but new car registrations of petrol cars grew 8.9%.

Across the market, private motorists led the growth, registering 76,729 new cars – up 5.0%. Fleet demand also grew marginally by 1.4%, while business registrations fell by -1.0%.

Mike Hawes, SMMT chief executive, said, “2017 got off to a good start in the new car market, buoyed by a great range of new models which are safer and cleaner than ever before.

"After record growth in 2016, some cooling is anticipated over the coming months, but provided interest rates remain low and the economy stable, the market is in a good position to withstand its short-term challenges.”

The performance reflects the strength and importance of the retail motor sector adding to the growth of the UK economy”, said Sue Robinson, Director of the National Franchised Dealers Association (NFDA) commenting on SMMT’s new car registration figures.

New passenger car registration rose by 2.9% in January, marking a 12-year high. Alternative fuel vehicles continued their positive trend (+19.9%) and now have a market share of 4.2%, the highest ever. Private demand grew by 5.0%. Diesel registrations were down -4.3%, while petrol saw an increase of 8.9%.

Sue Robinson, National Franchised Dealer Association director, said: “It is extremely encouraging to see that following last year’s slowdown, private demand came back strong with a growth of 5.0% in January.

“The decision of the Bank of England to raise the growth forecast for this year from 1.4% to 2.0% is a positive sign as, in line with January’s new car market figures, shows that the UK economy has remained stable in the aftermath of Brexit.

“A number of factors including the new and more expensive VED tax rates coming into effect in April, low interest rates and attractive finance packages will continue to attract new buyers in the upcoming months.”

"It is possible the figures in some segments are partially fuelled by impending tax changes, with demand effectively being pulled forward as a result.

"It is difficult to call exactly how 2017 will pan out but this time last year many were predicting a cooling off from the unprecedented sales levels of recent years.

"We saw that to an extent, but still saw an overall 2.3% increase on the previous year.

"With this in mind, it’s almost inevitable that record levels will cool at some point, particularly against a backdrop of potential rises in car prices due to the weakness of the pound and possible implications of Brexit.

"However, dealers can guard against this particular challenge by emphasising the importance of finance deals which I expect to remain very competitive. More than ever then, dealers should therefore ensure customers genuinely understand how finance deals can help them access the vehicles they want.”

Chris Bosworth, director of strategy at Close Brothers Motor Finance, said:  “January’s overall new car registration figures continue in similar vein to 2016, with registrations up and growth continuing in the market. This comes despite recent warnings of a slowdown in investment to the sector, fuelled by the uncertainty created by the UK’s decision to leave the European Union”

“After a nine month period of sustained decline, it’s interesting to note that new-car private sector sales are again on the increase. It’s also encouraging to see that the growth of the AFVs shows no sign of slowing, with that segment posting nearly 20% growth to take a record 4.2% market share. Given that last year (particularly in the second half) we saw consumers flocking to the used-car sector and preferring to finance 1-3 year ‘nearly new stock’ over brand new vehicles, it’ll be interesting to see whether the upturn of private new car registrations continues throughout 2017.

“Increasing production levels, registrations and consumers moving from the new to the used car market has had a positive knock-on effect for car-dealerships throughout the UK. Our recent dealer satisfaction survey highlights this, with 65% of dealers expecting growth this year.”

“Looking ahead, the effects of rising inflation on consumer spending and the changes to salary sacrifice from April 2017 to the business market will be the major challenges to the private sales market. Innovations, including more sophisticated driver aids, increase in safety improvements, and the uptake of ULEV, will be key in encouraging consumers to purchase new over used vehicles in 2017.” 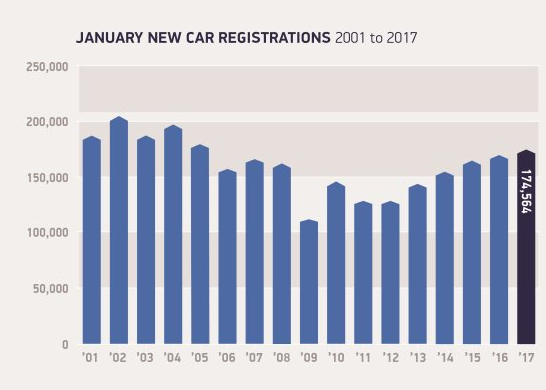 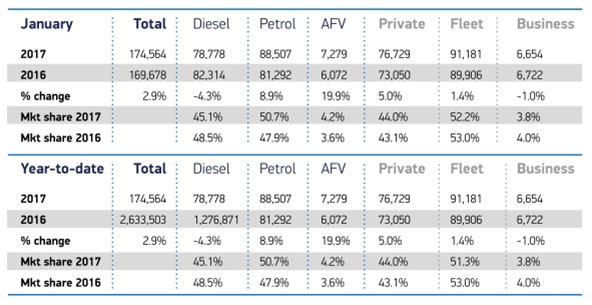