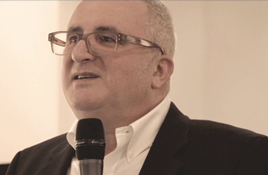 Jonathan Margolis, a London and New York-based technology journalist, and Financial Times’ columnist will be the next guest to share his insight with franchised dealer bosses at the AM Executive Breakfast Club.

The next meeting is on March 17. And for only the second time AM is moving from its usual home of Simpsons in the Strand to The Lowry, Manchester.

Margolis has a global following for his Financial Times column, Talking Tech, and reviews the best technology products in print, online and on video for the FT’s How To Spend It magazine and website.

He also writes on wider cultural issues for The Observer magazine and has won several journalism awards.

Margolis is an accomplished and polished TV and radio commentator, appearing frequently on the BBC and other networks.

He wrote and produced a Channel 4/National Geographic documentary on the race between amateur rocket scientists in the US, UK and Australia to get the first home-made spacecraft into orbit.

His continually updated talk, ‘Never Predict Anything – Especially The Future’ (the title is taken from a famous aphorism by Samuel Goldwyn) has for several years been stimulating and entertaining audiences worldwide.

In it, Margolis compares the visions of the future we all had in past decades (flying cars, mono-rails, robots making tea, plastic hosedown furniture and so on) with how the future works out in the real world.

He looks back at some of the hilariously wrong predictions in the past of how we would be living today – and also assesses how some uncannily accurate futurologists actually got things (almost) right.

Margolis also looks forward to the technology that most excites him for the future, from virtual reality to self-driving cars.

AM Executive Breakfast Club: What car dealers can learn from sports clubs

AM Executive Breakfast Club: What car dealers can learn from sports clubs

AM Executive Breakfast Club: Recognising the stars in your workforce

AM Executive Breakfast Club: Recognising the stars in your workforce