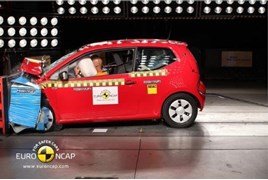 Euro NCAP car testing expert Matthew Avery wants an emphasis to be placed on dealer education after a salesman attempted to talk him out of investing in optional systems for his siblings’ Skoda.

Avery is head of research at Thatcham Research, which conducts Euro NCAP testing here in the UK and recently marked its 20th anniversary by comparing test results between a 2017 Honda Jazz and the popular hatchback of its day, Rover’s 100.

The safety standards demanded by Euro NCAP claim to have prevented 182,000 people being killed or seriously injured on UK roads since 1997.

But despite the development of ever-more stringent standards and new safety technology – such and autonomous emergency braking and lane departure alerts – has not been reflected in a change of priorities in car dealerships, Avery found.

“Safety should be prioritised within the sales environment. Absolutely. I recently bought a Skoda Citigo for my kids and the dealer tried to dissuade me from the optional safety pack.

“He said it would be a factory order and would take 12 weeks or more and that the system might not be any good anyway.

“I said ‘No thanks for your advice, I’ll have it anyway’.”

Avery added: “He’s probably thinking about his bonus and his targets and he doesn’t have a car with the safety pack in stock. If he’d had those cars in stock he would have been able to say ‘I can give you whatever you want’.”

UK car occupant deaths and injuries have fallen by 63% since Euro NCAP gave the Rover 100 one-star in its first test.

Euro NCAP started part testing program last year which sees vehicles rated with and without driver assistance systems where they are an optional extra.

Brands including Audi, Jaguar Land Rover, Mercedes-Benz and Volvo all fit such systems as standard, but those offering a lower list price often offer entry-level models which are less well equipped.

Now the Euro NCAP is campaigning for the standard fitment of AEB systems and a push by retailers and manufacturers to promote safety, claiming such systems could prevent 2,700 deaths and serious injuries in the UK every year.

Avery said that an emphasis also needs to be placed on “dealer education” to encourage customers to opt for safety-related options which could not only improve their chances of avoiding a collision, but may also reduce their insurance premium and improve their vehicles’ residual value.

One area that Avery thinks that manufacturers and dealers could impact the sales of optional safety features is through test drive and demonstration events. He said: “We’ve done work with Volvo before and I know that Subaru has demonstrator vehicles to drive.

“When a customer feels it, they get it and that’s why we hosted a lot of demonstrations at The London Motor Show last year.”

Annoyance or a neccessity?

Asked whether some motorists might be put off optional safety equipment due to perceived annoyance of unwanted warnings of less advanced, early systems, Avery conceded that it was an issue.

He revealed that Thatcham Research had found that, while 95% of cars returning for service at a dealership had their AEB system activated, around 50% of lane departure warning systems had been turned off.

Avery said: “I think that is because, while the AEB system might occasionally engage when the driver is in control, they can appreciate that there might be a time when they are less alert and it could avoid a collision.

“With the lane departure systems it is a little different and people do become annoyed with repeated warnings when they stray over a line without indicating and there is clearly no danger.”

Avery said that new testing parameters to be brought in to play in 2018 would aim to change this, dictating that lane departure systems must be developed which take into account a “threat level”, detecting oncoming cars or when a vehicle is leaving the road before eliciting a louder alert or automated steering intervention.

“The evidence is there that these systems save lives, so we want them to work well so that people don’t switch them off. That’s the aim,” said Avery.