Sytner is the best big employer, according to the latest results of the Sunday Times Best Companies To Work For programme.

The Leicester-based group – now the largest by turnover in the UK – is top in the Best 30 Big Companies countdown.

It has been in the top five of the survey for eight consecutive years. For the last two years it had been second.

The only other dealer group in the top-30 is TrustFord, at number 22.

The Institute of the Motor Industry is at number 93 in the Best 100 Not For Profit Companies.

Sytner's citation in The Sunday Times 2017 Best Companies To Work For:

Group managing director Darren Edwards says he typically spends two days a week working out of a dealership, and this is a source of inspiration to his staff (74%, second).

“I get a real sense of how life is for our team,” he says. “I want to speak to my colleagues face-to-face in the showrooms and workshops.”

Craig Churchill, a parts adviser at Bentley Leicester, agrees that senior managers are accessible. “Everyone’s so approachable,” he says. “It’s like one big family.”

Career progression is supported, says Georgia Patterson, who started as a host at Bentley Leicester last August: “It doesn’t feel like you have to stay in the same job forever.”

Her interest in marketing has already been encouraged by Cook, her boss. Like Patterson, staff agree the experience they gain at the retailer is valuable for their future (79%, third).

“When we tell new starters that pretty much every board member has worked their way up, it provides inspiration for them,” says Edwards.

Sales executive Roy Coates is another who started in the industry at the bottom, as a mechanic.

The firm he worked for was bought by Sytner and, aged 39, he was asked if he wanted to try his hand at sales. “I was really good at it,” he says. That was 13 years ago.

“This is the best place I’ve worked,” Coates says of Bentley Leicester. He enjoys meeting people and the financial rewards are good, but it’s his colleagues who make the job special. “I’ve only been here six months, and I’ve been made to feel really welcome,” he says. Individualism is also encouraged and the training, he adds, is “fantastic. You never stop learning, you always take something away from it.”

That, says Edwards, is this operation’s aim. “Put simply, we are determined to be the best at what we do,” he says. “I believe we have earned a good reputation over the years and this is key to attracting the best people. We make it hard to join but even harder to leave.”

> In the Best 100 Small Companies To Work For countdown: Carwow (9) 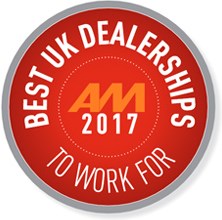 AM Best UK Dealerships To Work For 2017: AM has launched its campaign to find the best franchised dealer to work for.

AM has teamed up with Best Companies Group, that produces similar studies in other industries, to find and recognise the best places to work in the franchised dealer sector.

It will be the first survey to look purely at automotive retailers.