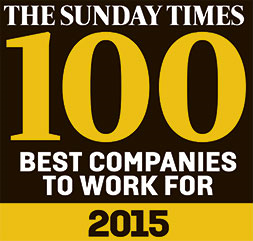 Car dealer Sytner has beaten household names such as American Express, McDonald's and Iceland in the Sunday Times 100 Best Companies to Work For.

It came second in the '25 best big companies' category, behind TGI Friday's, which is a new entry in the countdown. Sytner was number four last year.

Also, finance supplier MotoNovo Finance is the 14th overall in the 100 Best Companies.

The Sytner citation reads: "'I want a happy ship, but it is important that everybody knows which way we are steering that ship,' says Paul Farrell, head of business at the Glasgow centre, who is always around to chat to staff and the first to celebrate successes.

When the centre was named Porsche's dealership of the year recently, Farrell took all 35 members of the team out for a meal. “Unless everyone was involved there was no way we would have won that,' says Farrell, whose 10 years' service will be marked with an extra week's holiday this year.

Those going above and beyond the call of duty are rewarded with a bottle of champagne and a night out, and once a quarter one person from the dealership is nominated for Sytner's “making it special” awards.

The one-team culture goes beyond getting the day-to-day job done to encouraging support for charities (84%). Staff get a day off each year to help good causes, and people at the Glasgow centre have taken part in a sponsored cycle to Edinburgh, climbed Ben Lomond and played four rounds of golf in one day to raise funds for charities including the Children's Hospice Association Scotland.

Staff have also taken children out for a spin in a Porsche and held a silent auction to raise money for Ninewells Hospital in Dundee on behalf of a colleague treated there for cancer.

Work is an important part of life (83%) for employees, who think they have a positive future ahead of them (78%) at Sytner, which likes to promote from within. “You are made to feel like you make a difference, they care about you,” says trainee sales executive Christine Cameron, a former cosmetic make-up artist for Chanel, who joined Sytner Group in December.

'It reverberates around the whole showroom. Everyone has a great deal of respect and kindness for each other, and that comes through being treated well by the company.'

Cameron is enjoying the perks of the job, which include driving a different Porsche home every night to get up to speed with the models. Training is provided by both manufacturers and Sytner, and employees believe it benefits their personal growth (73%).

Sytner is part of US-based Penske Automotive Group, and staff say it is run on strong principles and is fun to work for (both 81%). 'If you are having fun you are more likely to work together as a team,' says new group managing director Darren Edwards.  Employees, almost half of whom have been on the payroll for at least five years, wouldn't leave tomorrow for another job (75% top)."

Sytner chairman Gerard Nieuwenhuys was inducted into the AM Hall of Fame in February at the AM Awards. It was his decision to enter the Sunday Times assessment based on a wish to become the best retailer.

“This recognition, which comes from team member feedback, is testament to our business-wide capacity to create a customer-led business model based around an engaged and energised team, where every team member has the opportunity to enjoy a long-term career."

The Sunday Times Best Companies to Work For 2015 is the 15th annual ranking of the best of Britain’s happy and motivated workforces.

More than 1,050 businesses and organisations registered to take part in its four surveys.

The leading 325 are recognised in four lists.

SMEs (50 to 250 staff) are assessed in The Sunday Times 100 Best Small Companies to Work For that will be published on Sunday, March 8.