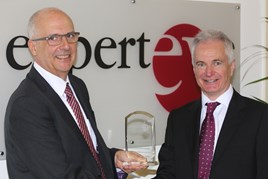 Norton Way Group has been named as the best fleet dealer group for new vehicle sales in 2017 in the Experteye awards.

Company car owners voting in Experteye’s Touchpoint driver satisfaction survey placed the Letworth Garden City-based retail group top of the rankings when it came to handling key events such as vehicle delivery, servicing, tyre replacement and its response to accidents.

The award follows Norton Way's receipt of the Best Fleet Operation Accolade at the AM Awards 2017.

Richard Siney, operations director at Norton Way Group, said: “To receive an award guided by fleet driver feedback is a fantastic result for our dedicated Corporate Team and is testament to the increased investment in people and processes made by Norton Way over the last year.

“This recognition is hugely important as it encompasses all aspects of the sales process and measures the service we provide our fleet customers with right up to ‘the moment of truth’.  As a team we are all delighted to receive this accolade.”

Norton Way Group won its accolade based on feedback drawn from over 60,000 drivers of leased vehicles during 2016, making this a truly objective reflection of driver attitude.

Experteye’s chairman and founder, Rick Yarrow, said: “Congratulations to Norton Way Group for winning this award, which is a huge achievement.

“This category is based purely on direct driver feedback taken immediately after delivery of their new vehicle, making it a very tough one to win.

“Company car drivers are the ultimate, and often harshest, judges and this award is based on their feedback when the service experience is fresh in their minds, which is why Norton Way are deserved winners of the best fleet dealer group for new vehicle sales for 2017.”

The Mercedes-Benz network was also recognised for its work with fleet customers at the Experteye awards, claiming the best fleet dealer network accolade.

Earlier this year AM Awards judges placed Letchworth Garden City-based Norton Way at the top of their rankings.