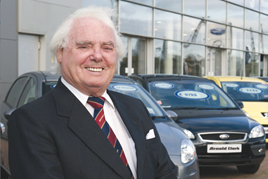 The company he founded in the 1950s, Arnold Clark Automobiles, announced he had died peacefully at home today.

It released a statement saying it was saddened to announce the passing of its founder and chairman.

"His unsurpassed work ethic and strong family values led him to build a market-leading automotive retailer that continues to go from strength to strength.

"Sir Arnold's entrepreneurial ideals continue to be at the heart of the business.

"His personal philosophies will continue to inspire everybody who works in the business, and will be the cornerstone of its future growth and continuing success.

"Our thoughts are with his family at this difficult time."

A family statement issued by his family said: "Sir Arnold Clark passed away peacefully this morning, 10 April 2017, surrounded by his family. He was a beloved husband, father, grandfather and a great friend and employer to many.

"He was an inspiration and the family will continue to carry on his vision.

"He will be greatly missed.

"We wish to thank all those who have sent messages of condolence and appreciate your kind support.

"We ask for privacy at this difficult time to allow the family to grieve."

The first UK car dealer to become a billionaire, Arnold Clark began trading cars in the early 1950s when, after leaving the Royal Air Force, he used his demob money to buy a Morris Ten Four for £70 before selling it at a profit.

The first Arnold Clark showroom in 1954 in Glasgow’s Park Road.

By the 1980s, Arnold Clark Automobiles had grown to become Scotland’s largest car retailer. Expansion into England, with an initial site in Liverpool, followed and in the the business was gradually transformed into a nationally recognised business.

Arnold Clark was awarded the Insider Elite Businessman of the Year Award and the Glasgow Chamber of Commerce Lifetime Achievement Award in the early 2000s.

In 2004, Clark received a knighthood in recognition of his services to the motor industry and the Scottish community. He also received the Entrepreneur of the Year Award from Master Entrepreneur and celebrated 50 successful years in business.

In the following year, Sir Arnold Clark received an honorary doctorate from the University of Glasgow.

In 2014, the business celebrated its 60th year with a record turnover of over £3 billion.

Sue Robinson, director at the NFDA, was this week keen to recognise Clark’s contribution to the industry and to its aspiring young talent in-particular.

She said: “It is with sadness that we have learnt of the passing away of Sir Arnold Clark, a truly inspirational leader and extremely well respected figure in the industry.

“In 2003, the Arnold Clark Group purchased GTG Training, which, through its centres, has given many young people the opportunity to learn skills and gain qualifications in the automotive industry.

“Sir Arnold Clark will be hugely missed, we send our condolences to his family and friends.”