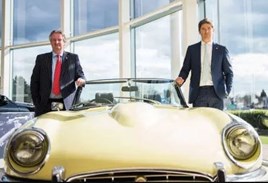 Sturgess Motor Group has announced plans to invest in its Jaguar Land Rover and ex-Mazda facilities as it marks its 120th year in business.

The Leicester-based dealer group started business as bike shop in 1897 and became an agent for Rover cycles at a Charles Street showroom back in 1904 has operated franchised with British Leyland, Singer, Simca, Maudslay Trucks and post-war Chevrolet and Belsize over the decades.

Now the group operates sites for Abarth, Alfa Romeo, Fiat, Hyundai, Suzuki and Volvo and is set to celebrate 70 years with JLR – making it the longest-serving dealer in the UK.

Speaking to the Leicester Mercury, chairman Chris Sturgess, great-grandson of the business' founder Walter E Sturgess, said that the group had recently invested £2.5 million on a new preparation facility and body shop near Broughton Astley and revealed plans to expand Its JLR dealership in Narborough Road and refurbish its Mazda site in Aylestone Road.

He said: "We've got quite a lot of activity coming up over the next two years with all our brands, and we're looking at refreshing all our sites and rebranding.

"We've got a property we will be developing in the next 12-24 months – the old Mazda site in Aylestone Road. At this stage plans are in their infancy but it will be a fairly major development.

"We've also got plans to expand with JLR in Narborough Road. That's going to be starting towards the back end of this year.”

Sturgess described the group’s JLR dealership as “one of the jewels in our crown”, adding: “With the expansion of the product portfolio we have to enlarge it so there will be some reconfiguring of that site allied to further premises development.”