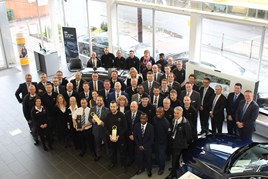 Jardine Motors Group emerged victorious from the recent Audi Q Power Awards 2016, which recognised the best performers from within the German brand’s UK network of retailers.

The top AM100 group’s Amersham Audi facility scooped the Centre of the Year accolade, while the group – which is represented by 11 Audi locations – was recognised with the Divisional Award.

Jardine was also recognised for its exceptional customer service, strong loyal customer base and high employee satisfaction on the night.

Commenting on the ‘Divisional Award’ win Jardine's Sadie Lowe, Audi division marketing executive, said: “I have been a part of the Jardine Motors Audi family for eight years now and over those years I have seen the Audi brand grow incredibly.

“We are getting stronger year on year and to hear of the amazing awards that we have recently won really does show that hard work, dedication and team work really does pay off.

“To receive the ‘Divisional Award 2016’ really is an outstanding achievement and one that I am very proud of.”

Stefan Wyatt, Audi UK's acting head of Customer Quality and Network Development, said: “2016 was the most successful year to date for Audi UK in outright sales terms, but also the most challenging year in living memory for our Audi Centre teams balancing day-to-day business obligations with the need to exceed the expectations of customers.

"For an Audi Centre to merit a Q Power award under normal circumstances requires an extraordinarily high standard of service delivered with unwavering consistency, but for a team to achieve this and then go on to outperform the very best Centres in the country during 2016 is a feat that is nothing short of momentous.

"The team at Amersham Audi should feel exceptionally proud of their performance and their major contribution to the brand’s ongoing success.”

Andy Davies, Jardine’s Audi brand director, said: “These prestigious awards celebrate our team’s strong ethos and organistion across all dealerships and our employees focus on delivering great and consistent customer service. It is humbling to see the awards celebrated by all employees throughout the division.”