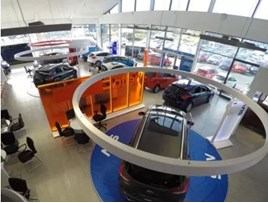 Super Group has continued its expansion into the UK car retail sector with the acquisition of Slough Motor Company for £24m.

The South Africa-based group has followed up its acquisition of Essex Auto Group in March with the completion of a deal to acquire the nine-site operation yesterday afternoon.

Six Ford sites and three Suzuki locations were involved in the deal which will see Super Group’s UK concern rise to a total of 24 Ford sites, three Suzuki, two Kia and two Fiat.

Bestodeck Limited, the holding company of Hillingdon-based SMC, appeared at number 86 of this year's AM100, with an estimated 2017 turnover of £162 million.

“The Rand has been strong compared to the pound for the past six months and that has helped us in our plans.

“A number of OEMs and independents have approached us about possible acquisitions and we continue to look at each on its own merits.”

Brown said that Super Group had been engaged in talks with SMC for around a year ahead of this week’s acquisition and considered the business to be well run.

While founder and owner Michael Warnes, who started the business in 1982, will retire following the deal, the remainder of the management team and the group’s 350 staff will remain in place, according to Brown.

He said: “It’s a well-run business and we have no intention of changing things. It will continue to operate under its existing name and benefit from its strong reputation.”

In its native South Africa it counts premium marques among its portfolio of partners and that is something that Brown suggested may be on the horizon in the UK. He said: “We have had approaches from various premium manufacturers and we are certainly looking at other OEMs.

“However, the acquisition really does consolidate our presence with Ford in the South East and around London and means that we will be able to realise some of the efficiencies of scale as a result.”

Super Group’s latest acquisition follows that of Essex Auto Group in March, a deal which saw it add to its existing Allen Ford network of dealerships for an undisclosed fee.

Essex Auto Group’s published accounts for year-end October 2016 reveal turnover at £158 million and pre-tax profits of £1.8 million. Its return on sales was 1.1%.