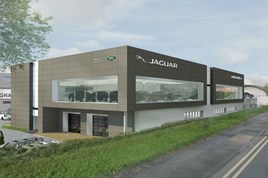 Newspapers look set to be make way for new cars as Harwoods Group hatches plans to create a Jaguar Land Rover showroom on the former home of The Argus in Brighton.

The building which housed the publication for a quarter of a century is set to be levelled to make way for the AM100 group’s latest JLR Arch Concept development, which will be spread over three storeys and is expected to create 60 jobs.

Plans submitted by the Harwood Group and Hanbury Properties for Argus House, in Crowhurst Road, Hollingbury, Brighton, have been recommended for approval by planning officers from Brighton and Hove City Council.

The Argus reported that the building, which will be demolished as part of the site’s redevelopment, had been used as a set for acclaimed director Ben Wheatley’s latest film Free Fire and became newspaper’s home in 1992 after moving from city centre offices in North Road.

The Argus moved to its new home in Manchester Street, close to Brighton Palace Pier, in November.

Harwoods Ltd is already investing in the JLR franchise after getting the green light to develop new Arch Concept facilities in Basingstoke and as part of plans to relocate its headquarters to Brinsbury.

Basingstoke and Deane Borough Council gave the business the go-ahead to redevelop the site in Joule Road, Basingstoke, at a meeting last October.

Harwoods Ltd had planned to relocate to the new site from its current location on Edison Road after gaining planning permission for a similar scheme in 2012 but delayed the move after JLR introduced a new corporate branding identity boasting “buildings of greater architectural quality” and “greater efficiencies”.

In January the group has also revealed plans for a new JLR location in Brinsbury, to replace its current Land Rover and Bentley showrooms in Pulborough.

Harwoods Group will relocate its head office as part of plans to create new Jaguar Land Rover and Bentley dealership on land bought from Chichester College.

The new facility next to its Brinsbury campus will also include an educational facility created “in partnership” with the college.