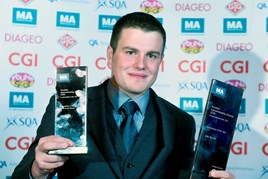 Arnold Clark has been announced as the principal partner for the 16th Scottish Apprenticeship Awards.

The AM100 retailer has leant its support to the prestigious event, which will take place on November 16th at Glasgow’s Kelvingrove Art Gallery and Museum is delivered by Skills Development Scotland (SDS).

SDS’s acting director of corporate affairs, John Robertson, said: “The increase in the number of entries we received for this year’s Awards is a testament to the hard work of apprentices and the commitment of employers across a wide variety of sectors.

“It seems very fitting that our principal partner in this year’s Scottish Apprenticeship Awards is Arnold Clark, an internationally recognised organisation that sees the value of developing Scotland’s workforce and encouraging other employers to do the same.”

Arnold Clark apprentice recruitment manager, Suzanne Sherry, said: “We are proud to be the principal partner of this year's Scottish Apprenticeship Awards, which reinforces our commitment to offer young people in Scotland excellent training and career prospects.

“Apprentices play an integral role in many organisations across the country, including Arnold Clark, and this event helps to recognise and reward their hard work and skills.”

Joe said: “It was never expected but what a way to round up my apprenticeship. I would say to anyone thinking about an apprenticeship to go for it, they won’t regret it. It is the way forward and it is the best thing I have ever done.”

There are 10 categories in the 2017 Awards including Apprentice Ambassador of the Year, Apprentice of the Year at Foundation, Level 2, 3 and Level 4 and above as well as awards for micro, SME, large and public sector employers, plus those who are committed to diversity in the workplace.