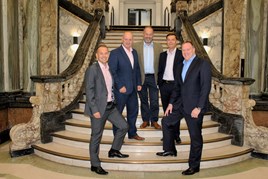 A multi-million pound private investment fund has been created by a consortium of experienced automotive investors who want to help entrepreneurs establish their own franchised car dealerships.

Tempus Automotive Investments Limited has been formed by industry experts who identified the limited number of sponsored dealer opportunities currently available and the significant funding challenges that new entrants face.

Research has shown that out of the new entrants to the sector in the last 15 years 92% were through manufacturer sponsored dealer programmes therefore highlighting the need for this fresh injection of blood.

Tempus has raised a multi-million pound fund which will be utilised to back a number of highly-regarded entrepreneurs over a three-year period.

Tempus director, shareholder and former Inchcape director, Dave Vickers, said: “I was very fortunate to have been supported by BMW back in 2003, which allowed us to purchase our first site and build a foundation to then further develop the Knights BMW Group.

“This journey came to a successful end when we sold to Lookers in 2016, however I still remember the first day when we took control and I had pretty much put everything on the line – a day not to forget but one that I would never change.

“I am a firm believer that there are some high calibre operators out in the market that would relish the opportunity to own their own business and have control of their future destiny. Tempus has been created to work with these individuals alongside specific manufacturer partners to give these entrepreneur’s that opportunity.”

David Kendrick of UHY Hacker Young and advisor to Tempus Automotive said: “This concept is a breath of fresh air for the industry.

“In recent years we have seen significant consolidation in the market and a number of smaller businesses/groups that have been unable to find an acquirer.

“Tempus not only gives the opportunity for high calibre operators in the sector to set up their own business, but also provides a great exit route for many owner drivers who may wish to retire or PLC’s to dispose of non-core dealerships.

“It will also assist manufacturers who have concerns over the reducing number of network partners, by bringing new entrants to their network. We very much look forward to working with the Tempus team as this programme develops.”

Entrepreneurs interested in the Tempus scheme will go through a thorough assessment programme before being given formal approval by the investor team for funding.

Once the approval has been granted, the Tempus team will work with the individual to target potential businesses for acquisition as well as working with key franchise partners to ensure the right business is identified.

Likely acquisition targets will be businesses with turnover up to £50m in viable retail locations but with shareholders that have no succession, PLC sites that are non-core to the main group or underperforming manufacturer sites.

A statement issued by the consortium said that applicants are expected to be experienced dealer principals, directors or general managers within businesses that they do not have a formal share ownership in, but have the appetite to own their own business and develop their personal net worth.

Tempus require each successful candidate to make a modest investment towards the share capital in line with the future opportunity, with the remaining balance of any acquisition being funded by Tempus Automotive.

Tempus Automotive director and shareholder Robin Luscombe, boss of AM Awards winning Robin Luscombe Suzuki, of Keighley, said: “It took me a long time to have the courage to leave my employer of 28 years to branch out on my own.

“We worked tirelessly to find the right opportunity and since acquiring the Suzuki business in Leeds have never looked back, achieving growth and heathy returns year on year.

“Running my own dealership gives me everything I ever wanted and being involved in Tempus excites me even more as this is a route to assist other high quality colleagues in the sector in making their first venture as an owner driver.”