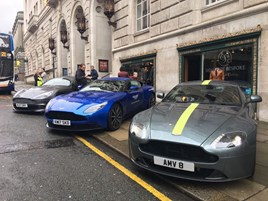 Wet weather did not dampen the spirits of supercar fans who turned out to see the latest Aston Martins from Pendragon’s Wilmslow dealership at they toured Liverpool’s landmarks.

Stratstone Wilmslow made a success of its Liverpool Live event despite the rain, parading its fleet of vehicles past St George’s Hall, the Liver Building and the Dr Martin Luther King Jr Building at the Albert Dock.

The retailer said that “hundreds of spectators” had braved the wet weather to see Aston Martin models, branded in unique Aston Martin livery, up close.

The Aston Martin Vanquish S and DB11 models toured the city, alongside the V8 Vantage AMR, which was announced as a late surprise.

Victoria Finn, marketing and communications director for Stratstone, said: “Liverpool Live lived up to its billing and gave local car enthusiasts the chance to see some incredible models in their city.

“We were delighted with the turnout and pleased to show Liverpool that Aston Martin Wilmslow is the place to go for quality new Aston Martin models.”