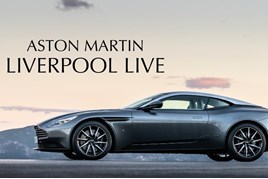 Aston Martin Wilmslow preparing to stop traffic with a supercar parade passing some of the most famous landmarks of Liverpool.

The Pendragon-owned franchise, part of the Stratstone network, will host the Liverpool Live event to showcase some of the finest Aston Martin sports cars in a tour taking place on Thursday (September 21).

Vanquish S and DB11 models will tour the city in an eye-catching livery alongside a surprise model that will be announced closer to the time.

“The tour of Liverpool will give spectators the chance to see some of the latest and greatest Aston Martin models up close at some of the city’s best-known locations.”

Starting at St George’s Hall, the cars will move on to Signature Bespoke, then to the Liver Building, before heading to the Museum of Liverpool.

Afterwards, the tour moves on to the Dr Martin Luther King Jr Building at the Albert Dock and then on to Boodles before completing a full circuit to its starting location.