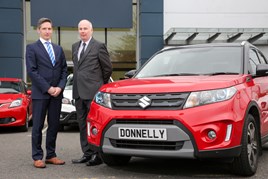 The group’s new addition on the Boucher Road, Belfast, takes its Suzuki site taly to three, alongside its existing sites at Eglinton and Newtownabbey.

Located next to Donnelly Honda, the franchise will be known as Donnelly Suzuki.

The Group now has a total of eight locations with 18 manufacturer partners and sells more than 15,000 vehicles a year, employing more than 700 people.

“Suzuki has been a manufacturing partner of Donnelly Group since 2005 so we are delighted to build on that partnership with the addition of a third Suzuki showroom,” he said.

“The Suzuki brand is one that matches very much with our own ethos of offering our loyal customers the best value, services and choice available anywhere in Northern Ireland.

“It is an exciting time for the manufacturer with the launch earlier this year of a new Swift model while vehicles such as the S-Cross, Vitara and Ignis continue to win awards and plaudits from those in the motor and consumer industries.”

Donnelly Group said in a statement that “many of the existing employees at the Suzuki showroom will be transferred” to its workforce.

Stephen Robinson, national sales manager at Suzuki GB PLC, said: “The opening of the Suzuki showroom on Belfast’s Boucher Road by the Donnelly Group ensures a smooth transition of the business for its employees and customers alike.

“With new Suzuki vehicles already available at Eglinton and Newtownabbey, we have first-hand knowledge of Donnelly Group’s strong track record.

“We look forward to further developing that relationship at the new Belfast site.”