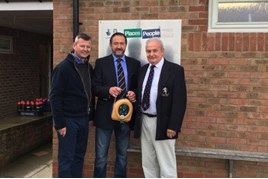 North Yorkshire-based Ray Chapman Motors has invested in two defibrillator machines for its Malton and York showrooms to safeguard its technicians and members of the public.

The Volvo retailer cited the increasingly sophisticated, “electric-based” tools used by its workshop staff as one motivator for installing the defibrillator machines, which would increase the chance of survival for a customer, employee or passer-by suffering a cardiac arrest.

The supplier of the life-saving devices, Leeds-based Defib Machines, will also donate a defibrillator into the local community at Ray Chapman-sponsored Malton and Norton Rugby Club.

Duncan Chapman, Ray Chapman’s dealer principal, said: “For us as a vehicle repairer and servicing facility, our technicians are working with increasingly sophisticated tools, much of it electronic based, consequently, we felt it was particularly important that we had access to the right equipment which could make all the difference to a person’s life chances when suffering a cardiac arrest.

“One of the Ray Chapman team members also volunteers for the British Heart Foundation’s Malton committee, where one of the objectives is to raise awareness of cardiac arrest and what you should do if a situation arises.

“One of the key influences in saving lives is access to a defibrillator in the early stages and we are encouraging local businesses to install them in their premises.

“We were delighted when the supplier we approached Defib Machines were so impressed with our commitment that they agreed to supply a third machine, free of charge, which we are arranging to have installed at our local rugby club in Malton in conjunction with the Robert Stephenson Trust.”

Cardiac arrest is the leading cause of death in the UK. Automatic external defibrillators (AEDs) require no medical training to use and are regularly checked and serviced as part of the rental package.

When opened, the automatic defibrillator provides clear vocal instructions telling the user what to do. There is no risk of accidental shock as one will only be administered if the heart is in a ‘shockable’ state.

Defib Machines managing director, Jonathan Gilbert, said: “I am delighted to see businesses like Ray Chapman Motors taking a lead and I hope others will follow suit; defibrillators can literally be the difference between life or death.”