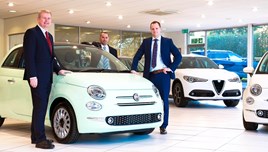 Snows Motor Group has added a third Fiat and Abarth dealership to south Hampshire and the Isle of Wight with the opening of a new showroom near Fareham.

The new operation on Bridge Road, Sarisbury Green, also deliver an approved service centre and an additional outlet for the group’s specialist used car operation, Too Good to Auction, which specialises in the retail of cars which have come to Snows through part-exchange deals.

The new Fiat and Abarth presence complements that of the recently built facility Snows Fiat at Millbrook, Southampton, and Snows Fiat at Newport, Isle of Wight.

Mark Austin, a Snows group franchise manager, said: “We are delighted with the acquisition and have undertaken significant refurbishments to the site. The eight-vehicle showroom at Sarisbury Green features new Fiat and Abarth models.

“It means we can provide a convenient sales and service offering to customers in the west and east of Southampton, as well as on the Isle of Wight.

“Customers like the convenience of being able to view and test-drive cars locally, rather than having to make extended journeys.

“Furthermore, to further utilise the new site, we are selling used Alfa Romeos and Jeeps, as well as selected cars from our Too Good to Auction service.”

With up to 10 jobs set to be created by the opening of the new Snows facility, David Carpenter has been appointed sales manager and Michael Ewen is after-sales manager.

The Sarisbury Green dealership is the latest franchise to be opened this year by Snows, which employs nearly 800 people and traces its roots back to Southampton 55 years ago through late founder Geoff Snow.

Others include Peugeot and Kia dealerships at Newbury, Berkshire. Snows Fiat on the Isle of Wight was the first Fiat dealership to open there in five years.