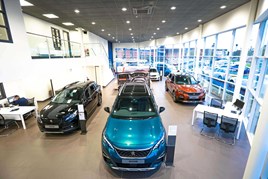 Snows Motor Group has opened a new Peugeot dealership in Newbury, Berkshire, following a six-figure investment in the facility.

The arrival of the showroom marks the opening of a the third franchise with the French brand for the Southampton-based group, with others in Basingstoke and Romsey.

A service workshop for Snows Peugeot Newbury and Citroën vehicles has also opened as part of the recent development.

David Bell, Peugeot and Citroën franchise manager, said: “The Peugeot showroom has had a significant investment, reflecting the manufacturer’s latest corporate identity, and providing a wow factor for visitors.

“We’ve already received a warm welcome from customers and we have the full range to suit various requirements, personalities and budgets.

"There are also a selection of quality used Peugeots.”

As well as the Peugeot and Kia dealerships in Newbury, Snows also opened a Snows Suzuki Basingstoke dealership in August.