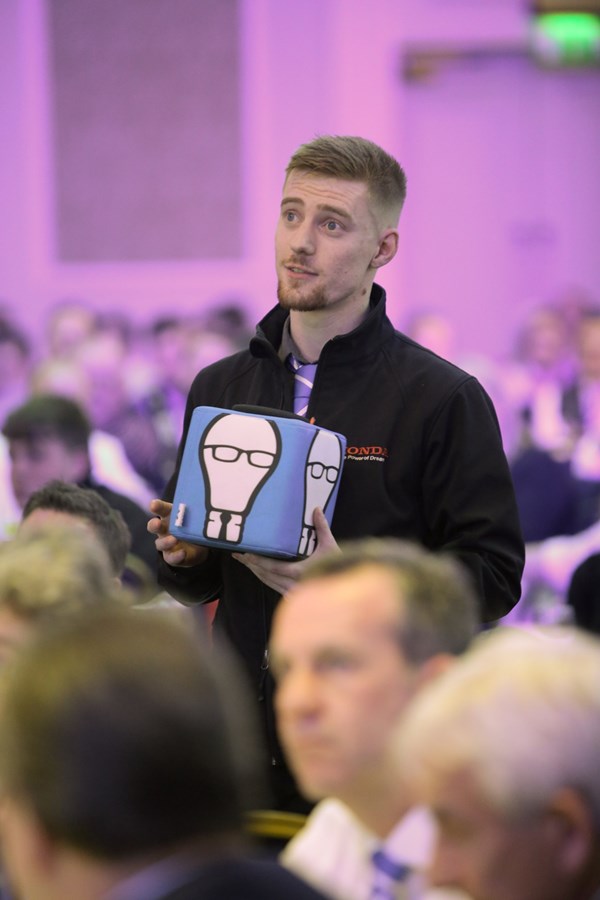 Donnelly Group’s 70th event for manufacturers, partners, customers and staff was held at the Armagh City Hotel and saw the magician conduct a range of interviews of guests including the sons of founder Peter Donnelly, executive chairman Terence Donnelly and director Raymond Donnelly.

A statement issued by the County Tyrone-based group said that the interview panels provided "an enlightening glimpse into the company’s past, present and future".

Since its beginnings in 1947, when Peter Donnelly opened a vehicle repair and taxi business in Caledon, County Tyrone, the business has experienced huge growth now boasting eight locations across Northern Ireland, 19 manufacturers and an annual turnover of £300 million.

In his interview, chairman Terence Donnelly said: “The last 70 years have seen vast changes in the motor trade industry, and from our humble beginnings our business has expanded at pace now employing over 700 people across our eight locations in Northern Ireland.

“Despite industry and technological changes, our ethos and values have remained the same since 1947, and that involves keeping the customer central to everything we do.

“We are dedicated to providing quality vehicles at the right price for our customers, all whilst delivering an impeccable service from purchase to aftersales.

“In addition to our dealership locations, it is an exciting time for TBC – Taxi and Bus Conversions - as they continue to expand on their efforts over the last decade.”

TBC’s managing director David Donnell said: “It is very exciting to be celebrating our 70th anniversary, it really is an ‘MOT’ for the Donnelly Group, a ‘Moment of Time’ in our history.

“We have recently announced plans for a £6 million-pound expansion of our site in Dungannon to facilitate our new 19th manufacturer, Jaguar Land Rover, which will create a number of jobs when complete and which will be the only premium brand outlet anywhere in mid-Ulster.

“We are now the largest family-owned motor business in Northern Ireland, with new vehicles from 19 manufacturers, as well as our used car Motorstores, which have over 1,200 used cars at six of our eight convenient locations across the province.”

Donnelly & Taggart’s director, Houston Taggart, said: “Our anniversary event was a fantastic day to gather staff, past and present, manufacturing partners and loyal customers to thank them for their support and it was a great opportunity to officially welcome our new managing director, Dave Sheeran, on board at Donnelly Group.”

Sheeran brings over 30 years’ experience in the motor industry, having most recently held the managing director position at Opel Ireland.

He said: “The Donnelly Group is an institution in the local motoring sector and I’m thrilled to be a part of the team as we celebrate this mammoth milestone.

“Over the last 70 years the Group has established itself as the leading, local, family-owned vehicle supplier and we are ready to continue to provide our outstanding level of service to customers across Northern Ireland for the next 70.

“Our dedicated team of experts are ready to help and advise customers across all eight of our showrooms.

"We now have more brands and models available than ever before and our award-winning teams are ready to find the vehicles that suit your needs and budgets.”