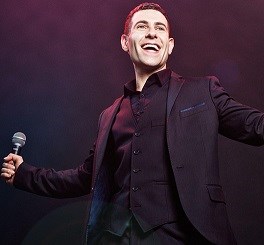 High profile hoaxer and comedian Lee Nelson has been confirmed as the after-dinner entertainmnet at the 2018 AM Awards in February.

Having handed Prime Minister Theresa May a P45 at the Conservative Party Conference, showered former FIFA president Sepp Blatter with cash and almost joined the England football team on a jet to the 2014 World Cup, Nelson will join guests for the glamourous awards night at the ICC in Birmingham on February 8.

Pranks which have also seen Nelson join Kim Kardashian’s better half, Kanye West, on-stage at Glastonbury when he stormed the stage in 2015 and place a banner on Philip Green’s luxury yacht, renaming it the BHS Destroyer, will be set aside as he delivers a stand-up performance honed at the Edinburgh Fringe and while Live at the Apollo.

As a further incentive for potential guests still able to take advantage of a cheaper “early bird” booking rate for the event, last year’s popular host and award-winning BBC broadcaster, Steph McGovern, returns to keep order at this year’s awards.

Tables and tickets are selling fast for the night, with guest numbers already up year on year.

Anyone that is yet to book is reminded that the early bird rate finishes on the December 31, and all table and ticket prices will increase on bookings made in the New Year.

For more details of table prices, and to secure your place for the night, visit www.am-awards.co.uk or contact Paige Phillips on paige.phillips@bauermedia.co.uk.