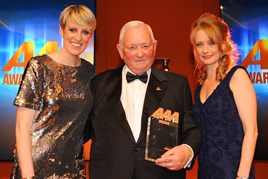 AM’s 2017 Hall of Fame inductee was set on his path to success by what he admits was the ‘effrontery of youth’ – the impossibility of failure as a young man.

That confidence has seen Michael Smyth become a champion of our industry, but the Swansway Group chairman started in humble beginnings – sheds.

As car ownership grew in the late 1960s, he realised people needed secure places to store them and he went from selling washing machines door-to-door to renting out lock-up garages as a sideline.

With the proceeds, he bought a garage comprising two sheds and two petrol pumps and by selling fuel cheaper than anyone else became the biggest fuel retailer in the area, eventually becoming Esso’s largest privately owned customer. He was given a Toyota franchise in 1967.

After Esso bought the fuel business, his dealer group, named after the location of his first dealership – Radcliffe Road Garage – became the biggest Toyota and Lexus dealer group in Europe. It was sold to Marubeni in 2000.

He founded EMaC, eventually selling the UK’s largest service plan provider in a management buy-out. Having established and sold so many successful ventures, he is best known for founding Swansway – named after his home – one of the UK’s most successful family-owned dealer groups.

Those who know him highlight his generosity – from supporting children’s charities, to personally supporting sick staff and their families, to buying iPads for a class at his old primary school.

One colleague of Smyth’s said: “In his 50th year in the business, it’s fantastic he is being honoured for all the jobs he has created and the standards he has set and maintained for himself and imbued in his sons and his staff.