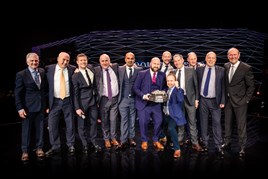 Lookers Mercedes-Benz Kent has been awarded the German premium car manufacturer's Retailer of the Year 2017 award.

Held at the O2, London, the awards were hosted by television personality and X Factor host Dermot O’Leary and welcomed 1,200 attendees.

Lookers Mercedes-Benz Kent, which operates from dealerships in Maidstone, Tonbridge, Ashford and Canterbury, landed the award after a year which saw the operation realise an increase of 14.4% in the sale of new cars, with similar double digit growth in the sale of used cars.

The judges were also impressed by an 8% growth in aftersales at Lookers Mercedes-Benz Kent, as well as its efforts in achieving the highest level of customer retention and satisfaction in the UK.

The award was presented to the Lookers team by Marcus Breitschwerdt, head of region europe for Mercedes Benz, and Gary Savage, chief executive of Mercedes-Benz UK.

“Every area of the business is aligned to make sure the customer gets the best experience possible.”

Lookers's Mercedes-Benz Kent success form part of a larger success story for Mercedes-Benz during 2017, with record global sales and record sales in the UK last year which saw 179,000 Mercedes-Benz cars registered, representing a 7% market share, making it the "number one premium manufacturer".

Commenting on his operation's awards win, Lookers chief executive Andy Bruce said: "We're very proud of our excellent partnership with Mercedes Benz, so to receive Mercedes-Benz Retailer of the Year is a tremendous honour.

“Our team in Kent have shown just how talented and hard-working they are and I want to offer them my personal congratulations and thanks for this fantastic achievement.”