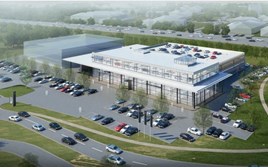 Details of a second new LSH Auto UK Mercedes-Benz dealership development have been revealed as part of a planning application for a retail and business park in Tamworth.

A month after planners at Stockport Metropolitan Borough Council gave the green light to the Hong Kong-based retail group’s proposed £60 million Mercedes-Benz and Smart retail facility on brownfield land in Stockport details have emerged for another sprawling new showroom for the group.

Coming as part of a “hybrid planning application” which includes three car dealerships, two drive-thru restaurants and seven industrial units the new site on Ventura Park, Tamworth, is set to be submitted to planners at Tamworth Borough Council tomorrow.

Sitting just south of the A5, the proposed dealership development includes a pair of two-storey buildings, including 510 customer car parking spaces for customers and a further 82 for staff on roof level.

Over 100 jobs will be created or transferred to the site.

Plans for two further car dealerships in the area have yet to be finalised by land owners Aucott and will be submitted as part of a separate planning application at a later date.

LSH Auto UK is part of the Hong Kong-based global automotive retailing group Lei Shing Hong, which is the largest retailer of Mercedes-Benz vehicles in the world.

Launched in 1972, it now operates more than 140 premier Mercedes-Benz dealerships in diversified markets such as the UK, Germany, China, Australia, South Korea, Taiwan, Vietnam and Cambodia.

In June 2016 LSH acquired a total of nine core dealership operations from the Mercedes-Bez Retail Group, including sites in Manchester and Birmingham.

LSH’s current Tamworth site, in Mile Oak, was built in the mid-1980s but the business has since outgrown the facility.

The planning application for the new development at Ventura Park stated: “Several support sites have been acquired over time by the business across the areas of Fazeley and Tamworth to plug the gap and the search for a new site has been ongoing since 2004.”