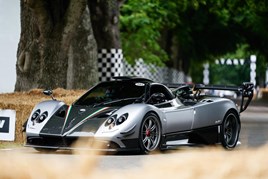 A £3.4 million Pagani Zonda supercar is at the heart of a legal battle between its tycoon owner and the London-based dealership which sold the car.

Turkish multi-millionaire Tufan Kalman has issued a legal writ to the Pagani UK operation on Premier Park Road, London, after it failed to provide the documentation that would allow him to drive it in Switzerland, where he now lives.

Kalman claims that he bought the Pagani Zonda 760 Coupe – one of just 13 built by the Italian supercar brand – in February last year but has been unable to drive it since.

Quoted in a report in The Sun newspaper, he claimed the car could not “be used because the dealership have not given him the UK registration documents for the vehicle”.

A writ issued to Pagani UK Ltd, which has now been issued by the court in London, stated: “Without the original registration documents from the UK, Mr Kalman is unable to get the car registered in Switzerland. Hence the car cannot be used.

“To date Pagani UK Ltd has neither delivered the registration documents, nor repaid the purchase price.”

Lawyers for Mr Kalman claim that, because he cannot use the car, he is entitled to rescind the contract and claim his money back, The Sun reported.

Quoted in The Telegraph, a spokesman for the Pagani UK Ltd dealership said that legal advice had been sought, adding the “Nothing is anywhere near as black and white as it looks on paper.”