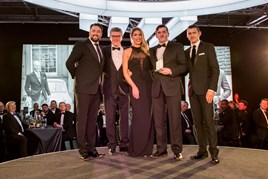 Grassicks emerged as Mini UK’s Retailer of the Year as the brand recognised its top-performing car retailers during a black tie awards event at Mini Plant Oxford.

The Perth-based retailer was recognised as the star performer among Mini’s 139 UK franchisees after leading the rankings in 13 criteria, including new car sales, used car sales, profitability and customer satisfaction.

Magnus Wang, franchise director, Grassicks Mini, said: “We are delighted to have won Mini Retailer of the Year.

“For Eastern Western Motor Group to win this in its first year of ownership is especially pleasing.

“It is fitting recognition of all the hard work and focus by the Grassicks Mini team in 2017.”

The share capital purchase saw Eastern Western increase its representation of the two brands to two centres each, taking its network portfolio to 12 franchise brands across more than 25 locations.

Newly-appointed Mini UK director, David George, said: “The Mini retail network represents the primary interface with our customers across the UK and play an essential role in the wider success of the brand.

“It’s terrific to recognise and reward our retail partners who in 2017 continued to drive innovation across all business areas and in doing so delivered exceptionally high levels of customer satisfaction.”